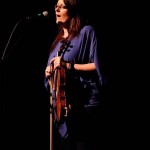 Delighted to welcome this year Deirdre Scanlan from Ballina, Co Tipperary. Deirdre has been at the forefront of traditional and contemporary Irish music for a number of years. An all Ireland champion at junior and senior level Deirdre is an accomplished solo and ensemble performer. In 1999 Deirdre’s first recording ‘Speak Softly’ which included some of her own song compositions was released to critical acclaim.
Deirdre’s first solo recording brought her to the attention of the Irish American traditional group ‘Solas’ and from 1999 to 2007 she took centre stage as lead vocalist with the group. With the group Deirdre toured extensively throughout the US, Japan and Europe. She has performed on a variety of stages from London’s West End to Radio City Music Hall NYC as well as headlining numerous international festivals, some of which include The Cambridge Folk Festival, Celtic Connections and Lorient Interceltic Festival.
In 2007 Deirdre left Solas and returned home where she is currently a primary school teacher in Nenagh, Co Tipperary. Moving home has allowed Deirdre to return to her traditional singing and teaching roots. A much sought after song tutor she has given workshops at festivals including Feakle Festival, the Geordie Hannah Traditional Singing Weekend, South Sligo Summer School and Scoil Eigse at Fleadh Cheoil na hÉireann. She has given master-classes to MA and BA students at the Irish World Academy of Music and Dance at the University of Limerick.
Deirdre is currently a member of the Coiste Ceoil, a sub-committee of the Ardchomhairle of CCÉ, where she engages in the promotion of traditional singing, as well as facilitating Fleadh Cheoil adjudication seminars in Ireland and the UK.
Her media credits include, The Late Late Show, TG4’s ‘Spillane an Fánaí’, ‘Na Bailéid’ with John Spillane and Fleadh TV. An accomplished fiddle player Deirdre teaches traditional singing and fiddle with the Kincora School of Music in Killaloe Co Clare, she is also a co-ordinator of Kincora Trad Fest Killaloe and Ballina.