Eibhlís, a native of Bantry West Cork, grew up in a very musical household and began playing the tin whistle at the age of five. She credits her parents, Mary Tisdall and Tom O’Sullivan, along with her uncle, Richard Tisdall, as having strongly influenced her music from a very young age. She has toured Ireland and Britain with Comhaltas Ceoltóirí Éireann and holds a number of All-Ireland titles on flute. She plays and teaches at various festivals around the country and has performed on TG4 and Raidió na Gaeltachta. Having attended traditional singing classes with the renowned Múscraí singer, Máire Ní Chéilleachair from a young age, Eibhlís attends Oireachtas na Gaeilge annually and has been awarded prizes in both the ‘Agallamh Beirte’ and ‘Lúibín’ categories. Most recently, she was chosen as a finalist in the prestigious Bonn Óir Sheáin Uí Riada competition on flute. Eibhlís is a primary school teacher in Scoil Naithí, Ballinteer. She also teaches the flute and tin whistle with Craobh Naithí in South Dublin.

Kate has been involved in traditional music and singing for over 40 years.  She has won various All Ireland titles throughout the years in singing and tin whistle.  She has toured Ireland, England and the USA with CCE.  Kate was also involved in the promotion of traditional music throughout Donegal during the summer season and was involved in Seisiún.  She also represented Ulster at All Ireland Scór competitions.  Kate has taught music extensively all over Donegal and has been successful in producing All Ireland Champions down through the years.  She really enjoys encouraging children to participate in playing and singing of music in every way possible.

Deirdre is an emerging young musician from the Inishowen Peninsula, County Donegal. Equally proficient on whistle or as vocalist, Deirdre has taken part in Fleadhanna Cheoil from a very young age, and has appeared with youth ensembles Coirm, Inishowen Traditional Music Project Ensembles and most recently Cineál. In 2016 she was selected to part of Feis Spè Ceilidh Trail performing throughout the Highlands in Scotland. Deirdre has years of experience teaching at Ceolan School of Music – Moville, Ceol na Coille Summer School – Letterkenny and Millstreet Trad Fest – Cork. In 2018 Deirdre was chosen to perform at Féile na hInse’s Recollections Honoria Galwey- Life and Music, uncovering some of the music collected by fellow Inishowen woman Honoria Galwey in the 1800’s.  She is currently in her second year studying Traditional Music at the Irish World Academy of Music and Dance at the University of Limerick. 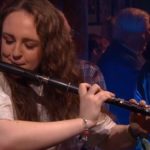 Nicole is a young traditional flute player from the Dingle Peninsula in Co. Kerry. She is a second year UCC Music and Irish student and is the recipient of one of the college’s prestigious Quercus Creative and Performing Arts scholarships for outstanding performance of traditional music. Nicole has also been awarded the Comhaltas Scholarship as well as The Dónal ‘Doc’ Gleeson Award by the Music Department of UCC. A regular performer in the vibrant West Kerry traditional music scene, Nicole often performs alongside Tommy O’Sullivan, Caroline Keane, and Méabh Begley. She has also appeared on Méabh’s single ‘Amhrán na nGael’. Nicole has travelled extensively to perform in several far off locations. In 2015 she ventured to Boston, last year she played in Moscow alongside the acclaimed Begley family and this year she travelled to Vietnam to play for the Irish Embassy. She appeared on TG4’s ‘Fáilte 2018’ in the company of Muireann NicAmhlaoibh, Gary O’Brien and Donogh Hennessy. She has performed for Prince Charles during his visit to UCC, and at Electric Picnic as part of the UCC Tradsoc.