Music From The White Stone

Having a traditional musician of great skill and awareness of music which has been handed down in a locality is an important cultural asset to any community. Having a family of them is an absolute blessing. This is the case with the Harrigans, Roisin, Damien and Paul. They are amongst the most gifted musicians of their generation and take great pride in the music of their native Inishowen and wider County Donegal. They have handsomely repaid their community and those musicians of the past, who kept the music alive, by their sensitive and studious research and passion for learning. Their playing is performed with a deep respect for the tradition. Even more so, they are exceptional educators in passing on the music through their tireless teaching efforts.

Paul is a multi-instrumentalist; at home holding flutes, the fiddle, mandolin and other stringed and percussion instruments. He is most commanding when playing uilleann pipes and accordion, which he does with rare sensitivity. This recording documents his gift for piping as well as his dedication to taking old tunes, now only rarely heard, and reclaiming them for uilleann pipes. These include melodies from Honoria Galwey’s Old Irish Croonauns (1910) containing rare tunes from Inishowen as collected in the second half of the 1800s as well as Cairdeas na bhFidléirí’s various collections of Donegal tunes. Many of these tunes will surprise the listener as they have not been part of the regularly performed canon of the Irish tradition in recent times. Through Paul Harrigan’s playing they are certain, however, to experience a new lease of life. Paul has also contributed to the Donegal repertoire by creating new tunes inspired by local history, people and the striking landscape of Inishowen. He is joined here by his wife Una Ní Bhriain, daughter Aobha, sister, Roisin McGrory and musical colleagues Tim Edey and Joleen McLaughlin.

Paul Harrigan is from the Inishowen Peninsula, Co. Donegal. Born into a musical family, he was influenced at an early age by his teachers Dinny McLaughlin, Evelyn Boyce, Theresa McClure and Finbarr McLaughlin. He has the distinction of being All-Ireland champion on both the Uilleann Pipes and Piano Accordion.

He has been teaching Traditional Music for the past twenty-eight years. A respected and versatile musician, Paul has traveled extensively, performing in Canada and the USA, and through-out Europe and China. He has toured and recorded with groups such as Lúnasa, Tuath, (Ireland), Dirty Linen, (France) and BlØf (Holland), and with virtuoso solo performers and composers Mícheál Ó Súilleabháin, (Ireland), Benoit Guerbigny, Renaud Séchan and Jean-marc Padovani (France).With friend and colleague Terry Woods, Paul has been a member of the Woods Band and original member of The Hell Fire Club with Shane McGowan, Terry Woods, (The Pogues), and the legendary Ronnie Drew (The Dubliners). The Melting Pod project in 2014 was a collaboration ‘Bronx meets Inishowen’ with musicians Ralphe Rolle and Selan Lerner (Chic) and sister Roisin McGrory.

Performing with such a wide variety of musicians has enabled Paul to fuse Irish traditional music with such musical genre as Jazz, Rock, Blues and spoken word. In March 2009, Paul traveled to Beijing with contemporary Irish composers, Brian Bridges, Linda Buckley, and Hugh O Neil, to perform a series of concerts and lectures featuring Paul on the Uilleann Pipes.

Paul graduated form the University of Ulster with Bmus Hons in 2011 and has tutored with the University of Limerick, providing master classes on both Uilleann Pipes and Piano Accordion for the MA in Performance and the BA in Traditional Music and Dance. He set up his own traditional music school ‘Ceol na Coille’ in 2011. In 2013, Paul set up ‘Coirm’ a musical platform for young musicians of different musical backgrounds to come together and perform in a variety of settings, formal and informal, at home and abroad. Ceol na Coille Summer School of Irish Traditional Music, from 2012 to date, has welcomed students of all ages from USA, Canada, Belgium, Holland, Germany, Austria, New Zealand, England, Scotland, Japan, Hungary and throughout Ireland. The Summer School program also runs a very successful CPD course for teachers in traditional music ‘An Integrated Approach to Irish Music Pedagogy’ and has been approved by the Department of Education and Science.

Paul has released a solo album of Uilleann Pipe music following a grant awarded from the Arts Council of Irelands Deis Recording and Publication Award. The album entitled – Music from the White Stone – consists of music researched from the manuscripts of the collector Honoria Galwey, from the Donegal fiddle repertoire and new compositions of his own. Paul is joined on the album by Tim Edey – Guitar, Joleen McLaughlin – Harp and Roisin McGrory – Fiddle.

Paul still performs throughout Ireland and abroad and is highly sought after as a tutor for master classes and stagecraft performance. Paul’s musicianship reflects his musical apprenticeship, a deeply rooted education in the style, tradition and flair of the Irish music of his native Inishowen. His command of the music enables him to show his virtuosity with versatility. 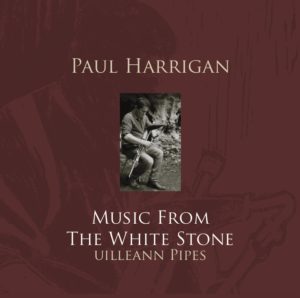