With the new term commencing and the gradual easing of restrictions, 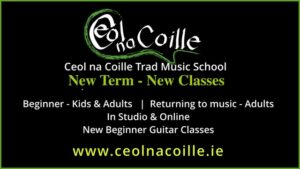 we are delighted to welcome new students to Ceol na Coille.

We have new Beginner Classes for children and adults along with our existing classes for all levels. A Return to Music class for those wishing to dust off an instrument that may have been set aside for a while. There will also be a new Beginner Guitar class this term. Drop us a message or email for more information.

Due to the Covid 19 Pandemic, Ceol na Coille Trad Summer School 2020 will not take place this year.
In these unprecedented times, the health and safety of students, tutors and the local community is of utmost concern. We apologise for any inconvenience this may cause but feel this is the correct action to be taken.  Our dates for 2021 are 12th-16th July.
2021 will be our 10th anniversary year and with an even bigger ‘Jammed Packed’ program of events, we hope to welcome you all again.  Take Care and Stay Safe

It seems like a lifetime ago now! Our encore set from launch of ‘Music From The White Stone’ in January 2020. With Roisin, Deirdre and Ella McGrory, Úna Ní Bhriain and Aobha Ní Aragáin.

Final details of the 9th Annual Ceol na Coille Summer School of Traditional Music in Letterkenny, Co. Donegal, will be released over the next few days. This year again, another stellar line up of fantastic Tutors, Workshops, Recitals, Concerts and Sessions. To keep up to date, visit https://ceolnacoille.ie/

Hi All. The dates for Ceol na Coille’s 9th Summer School of Traditional Music are set. A full list of tutors, recitals and gigs will be updated over the coming weeks. Feel free to check it out and put in your diary.

Delighted to welcome one of the most exceptional musicians in traditional music, Dermot Byrne as our box tutor this summer!

We’d like to offer a big welcome to our new guitar tutor for this year, Innes Watson of Scotland!

Growing up in the Scottish Borders with a range of influences and experiences, Innes is one if the most highly-regarded and sought-after musicians on the scene today. He is also much in demand as a teacher with both the Royal Conservatoire of Scotland and various music schools and organisations across the country. Innes has been heavily involved in some of the most successful albums in Scottish Music over the last fifteen years and ‘MG Alba Scots Trad Music Awards’ awarded him the title of “Instrumentalist of the Year” in 2011.

A composer of fiddle tunes, string arrangements, guitar music, songs and much more he is currently working on a whole host of exciting new projects including his “Guitar Colloquium” due to be released in the soon. Here he is playing on Striven Session with Undon Noodle

Don’t forget to book your place with Innes this year:
https://ceolnacoille.ie/summerschool/
And join us from 8th-12th July in Letterkenny, Co. Donegal

We are very excited to welcome a new harp tutor to Ceol na Coille this year, the incredibly talented Mr. Oisín Morrison!

Oisín is also a renowned flute player and composer who has taught and performed extensively at festivals both at home and abroad. He has shared the stage with a whole host of distinguished musicians including Mick O’Brien, Téada, Steve Cooney, Peadar Ó Riada, Mikie Smyth and Zoe Conway.

Oisín has won numerous awards for his music including Bonn Óir Sheáin Uí Riada and holds many Oireachtas and Fleadh Cheoil na hÉireann titles. He was also a Ad Astra Performing Arts scholar in UCD where he completed a first class Masters in Irish literature. His compositional work has been met with great acclaim and here he is performing some of his work from “Clann Lír”, performing beautifully alongside a string quartet!
Oisín Morrison Music

As we start revealing the wonderful summer school tutors we have in store for you for this July, we would like to welcome this year Concertina maestro Cillian King!

Limerick native King is currently one of the most in demand multi-instrumentalists in Ireland today. As well as being an accomplished concertina player, he is also proficient on guitars & keyboards and has toured the world with many acclaimed bands & artists including Ulaid and Duke Special, Ímar, Aldoc, Pauline Scanlon and Moxie. He is a member of both Notify and Atlas with whom he has released successful albums to critical acclaim.

Fond of a challenge, here he is tackling the daunting “Moto Perpetuo, Op.11” written by Niccolo Paganini! One for our concertina students to get practicing!

The youngest ever musician to win the prestigious BBC Young Folk Award, Jarlath’s music has alwas been met with high acclaim! He has released several well-received albums with his duo partner Ross Ainslie Music as well as his solo album in 2015 not to mention a second solo album in the works. A three time All-Ireland champion by age 19, Henderson has gone on to perform alongside household names such as: Mike McGoldrick, Capercaillie, Paddy Keenan and Phil Cunningam.

Napier brings an eclectic musical heritage with him to Ceol na Coille. Deeply rooted in the music of his local Strathspey, Hamish went on to study Jazz Keyboard and composition at Berklee in the US. He is much sought after as a composer, performer and tutor and has released two incredibly successful solo albums to date with “The Woods” (his third solo effort) on the way.