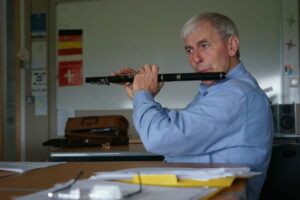 Originally from Aughavas Co Leitrim and now living in Letterkenny, Co. Donegal. John grew up in an area that was rich in traditional music where his great influences were his father Peter, Michael McNamara and the flute player John Blessing. John has been involved in teaching music and as an adjudicator and music examiner for the RIAM and TTCT exams for many years. He has taught at the summer school in Tocane France and at various flute work shops throughout the country. He has also performed at various music festivals in Europe and toured America with Comhaltas. The album The Missing Reel with Sligo fiddle player Seamus Mcguire has been hailed as one of the all time classics of fiddle flute playing .John has a great interest in old musical collections and manuscripts and in passing these tunes on to musicians. He holds a TTCT diploma and his playing could be described as an attacking driving style with great emphasis on ornamentation and power and tone.
Book today www.ceolnacoille.ie/summerschool
Go Visit Donegal Go visit Letterkenny, Heart of the Northwest. John Lee What’s on Donegal
@DepartmentofCultureIRL
#ceol22
#LocalLive
#tradcamp
#summerschool
#Letterkenny
#Donegal